With Windows malware getting so much attention nowadays, it's easy to forget that attackers also target other OS platforms. Let's take a look at a recent attempt to install an IRC bot written in Perl by exploiting a vulnerability in PHP.

The web server received the initial probe from 46.41.128.231, an IP address that at the time was not flagged as malicious on various blocklists:

The connection lacked the headers typically present in an HTTP request, which is why the web server's firewall blocked it with the 403 Forbidden HTTP status code error. However, that response was sufficient for the attacker's tool to confirm that it located a web server.

The offending IP address initiated another connection to the web server approximately 4 hours later. This time, the request was less gentle than the initial probe:

As shown above, the attacking system attempted to access /cgi-bin/php on the targeted server. The parameter supplied to /cgi-bin/php, when converted from hexadecimal into ASCII, corresponded to this:

These parameters, when supplied to a vulnerable version of /cgi-bin/php, are designed to dramatically reduce security of the PHP configuration on the system. We covered a similar pattern in our 2012 diary when describing the CVE-2012-1823 vulnerability in PHP. The fix to that vulnerability was poorly implemented, which resulted in the CVE-2012-2311 vulnerability that affected "PHP before 5.3.13 and 5.4.x before 5.4.3, when configured as a CGI script," according to MITRE. The ISS advisory noted that,

SpiderLabs documented a similar exploitation attempt in 2013, where they clarified that "one of the key modifications is to specify 'auto_prepend_file=php://input' which will allow the attacker to send PHP code in the request body."

With the expectation that the initial part of the malicious POST request reconfigured PHP, the body of the request began with the following code:

If the exploit was successful, code would direct the targeted server to download /.a/hb/phpR05 from the attacker's server, saving the file as /tmp/.bash_h1s7, then running the file using Perl and then deleting the file. Searching the web for "phpR05" showed a file with this name being used in various exploitation attempts. One such example was very similar to the incident being described in this diary. (In a strange coincidence, that PHP attack was visible in the data that the server was leaking due to a Heartbleed vulnerability!)

The malicious Perl script was an IRC bot, and was recognized as such by several antivirus tools according to VirusTotal. Here's a tiny excerpt from its code:

This bot was very similar to the one described by James Espinosa in 2013 in an article discussing Perl/ShellBot.B trojan activity, which began with attempts to exploit a phpMyAdmin file inclusion vulnerability.

In addition to supplying instructions to download the IRC bot, the malicious POST request contained PHP code that implemented a reverse backdoor, directing the targeted web server to establish a connection to the attacker's server on TCP port 22. That script began like this:

Though the attacker specified port 22, the reverse shell didn't use SSH. Instead, it expected the attacker's server to listen on that port using a simple tool such as Netcat. Experimenting with this script and Netcat in a lab environment confirmed this, as shown in the following screenshot: 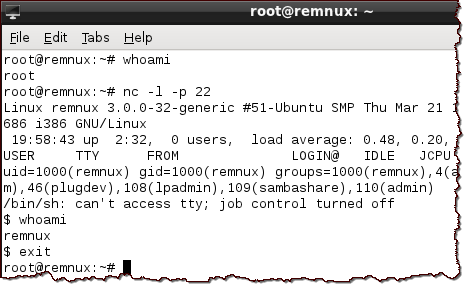 In this laboratory experiment, 'nc -l -p 22' directed Netcat to listen for connections on TCP port 22. Once the reverse shell script ran on the system that mimicked the compromised server, the simulated attacker had the ability to run commands on that server (e.g., 'whoami').

Interestingly, the production server's logs showed that the system in the wild was listening on TCP port 22; however, it was actually running SSH there, so the reverse shell connection established by the malicious PHP script would have failed.

A bit of web searching revealed a script called ap-unlock-v1337.py, reportedly written in 2012 by "noptrix," which was designed to exploit the PHP vulnerability outlined above. That script included the exact exploit code used in this incident and included the code that implemented the PHP-based reverse shell. The attacker probably used that script with the goal of installing the Perl-based IRC bot, ignoring the reverse shell feature of the exploit.

The attack, probably implemented using automated script that probed random IP addresses, was designed to build an IRC-based bot network. It targeted Unix systems that ran a version of PHP susceptible to a 2-year-old vulnerability. This recent incident suggests that there are still plenty of unpatched systems left to compromise. The attacker used an off-the-shelf exploit and an unrelated off-the-shelf bot, both of which were readily available on the Internet. The attacker's infrastructure included 3 different IP addresses, none of which were blocklisted at the time of the incident.

Lenny Zeltser focuses on safeguarding customers' IT operations at NCR Corp. He also teaches how to analyze malware at SANS Institute. Lenny is active on Twitter and Google+. He also writes a security blog, where he recently described other attacks observed on a web server.

I'm find in my server this variant: