There is an interesting way of knowing what kind of filters are placed in the gateway of a specific host. It is called firewalk and it is based on IP TTL expiration. The algorithm goes as follows:

Let?s see this with a real example. Consider the following network diagram: 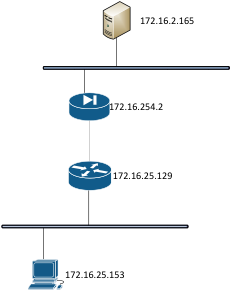 Firewalking happens with the following steps:

2. An ICMP Time Exceeded message is received from the default gateway for the TTL=2 and TTL=1 packet, which means there are two gateways between origin and destination and TTL=3 is the distance to the destination

Let?s see the first packet to port 1 and TTL=3:

Timeout occurs, so same packet is sent with TTL=2:

ICMP type 11 code 0 is sent from the gateway routing the destination host, which means the packet was forwarded and the port is opened:

How can we use this technique? Nmap has a firewalk script that can be used. For this example, the following command should be issued: