Following my yesterdays diary (http://isc.sans.org/diary.html?storyid=5830), here are some other interesting things Conficker does.

If you tried to clean Conficker from an infected machine, you probably noticed that you can't open the registry key it creates for its service. The registry key is located in HKEY_LOCAL_MACHINE\SYSTEM\CurrentControlSet\Services\[random] where [random] is just a random text string Conficker generated. This registry key contains information about Conficker's service, so in order to prevent users from disabling it, Conficker modifies ACLs on this registry key. As shown in the screenshot below, Conficker calls the RegSetKeySecurity() function from ADVAPI32.dll which sets appropriate permissions on this key: 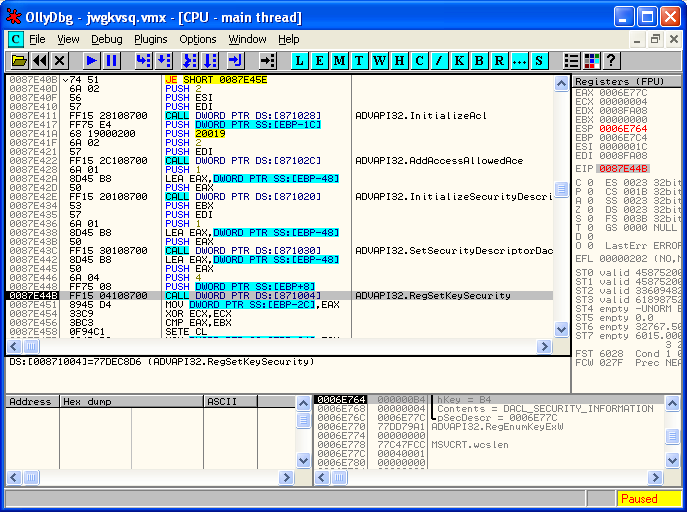 The permissions are very simple – Conficker removes all access to the key except for SYSTEM. The screenshot below shows what the ACL on this key looks after the function mentioned above is called: 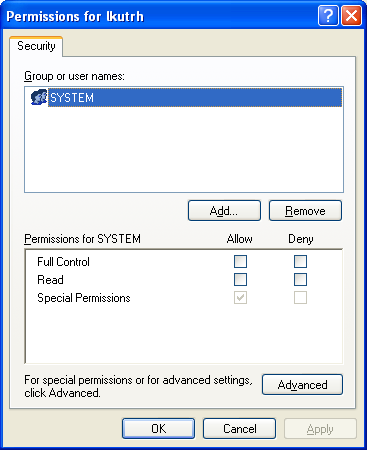 This will effectively prevent a user from opening the key, even if he is a local Administrator. Old trick, but still effective, let's move on. 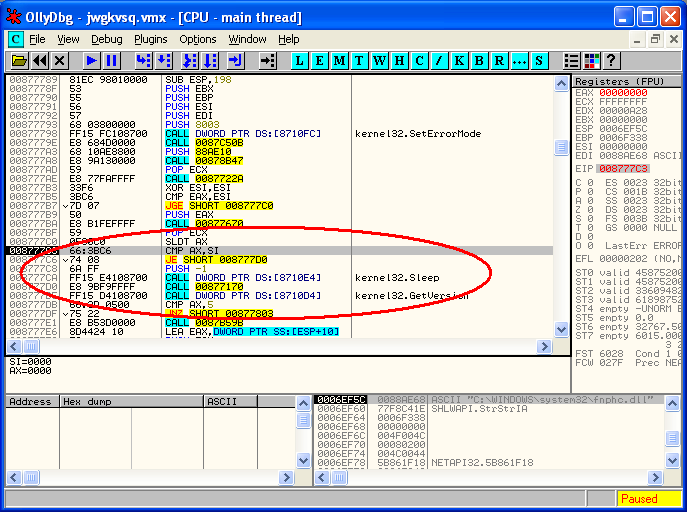 During the execution, Conficker calls the SLDT instruction many times. The SLDT instruction stores the Local Descriptor Table in a register that is then compared by Conficker with certain values. This allows Conficker to detect if it's running in a virtual machine – LDT of a native system will be 0x0000 while in VMWare (or VirtualPC) LDT will be relocated (for example, in VMWare 4 it will often be 0x4058). You can see in the code above that Conficker compares the result of the SLDT instruction with 0. If it is 0, the execution continues, otherwise Conficker calls the Sleep function with the value of -1 (0xFFFFFFFF) – this will cause the process to sleep for 29826 hours (so, like forever).
It is worth nothing that a similar trick was initially published by Joanna Rutkowska and further developed by Tobias Klein in his ScoopyNG tool (http://www.trapkit.de/research/vmm/index.html).

After all this we can definitely say that the Conficker authors were not amateurs – this looks like professionally written code. Stay tuned for more tricks at the SANS ISC.

Mega thanks to h4z4rd for spotting the SLDT trick.