We recently identified a new Guildma/Astaroth campaign targeting South America, mainly Brazil, using a new variant of the malware. Guildma is known by its multiple-staged infection chain and evasion techniques to reach victim’s data and exfiltrate them. In a previous diary [1] at Morphus Labs, we analyzed a Guildma variant which employed an innovative strategy to stay active, using Facebook and YouTube to get a new list of its C2 servers.

The innovation this time is the use of Finger, an old service designed to retrieve information about a particular user or host on a network but employed by Guildma to retrieve the command that will download and start the new victim’s computer infection. In addition, Guildma is bringing its own legit binary to the victim’s machine to employ a technique named Signed Binary Proxy Execution, reducing the chances of being detected.

In today’s diary, check the results of the analysis of this new variant along with MITRE ATT&CK TTPs and IOCs. To start, look at Figure 1. This is the traffic generated by the new variant while contacting attackers’ Finger server and receiving back the malicious command to be executed. 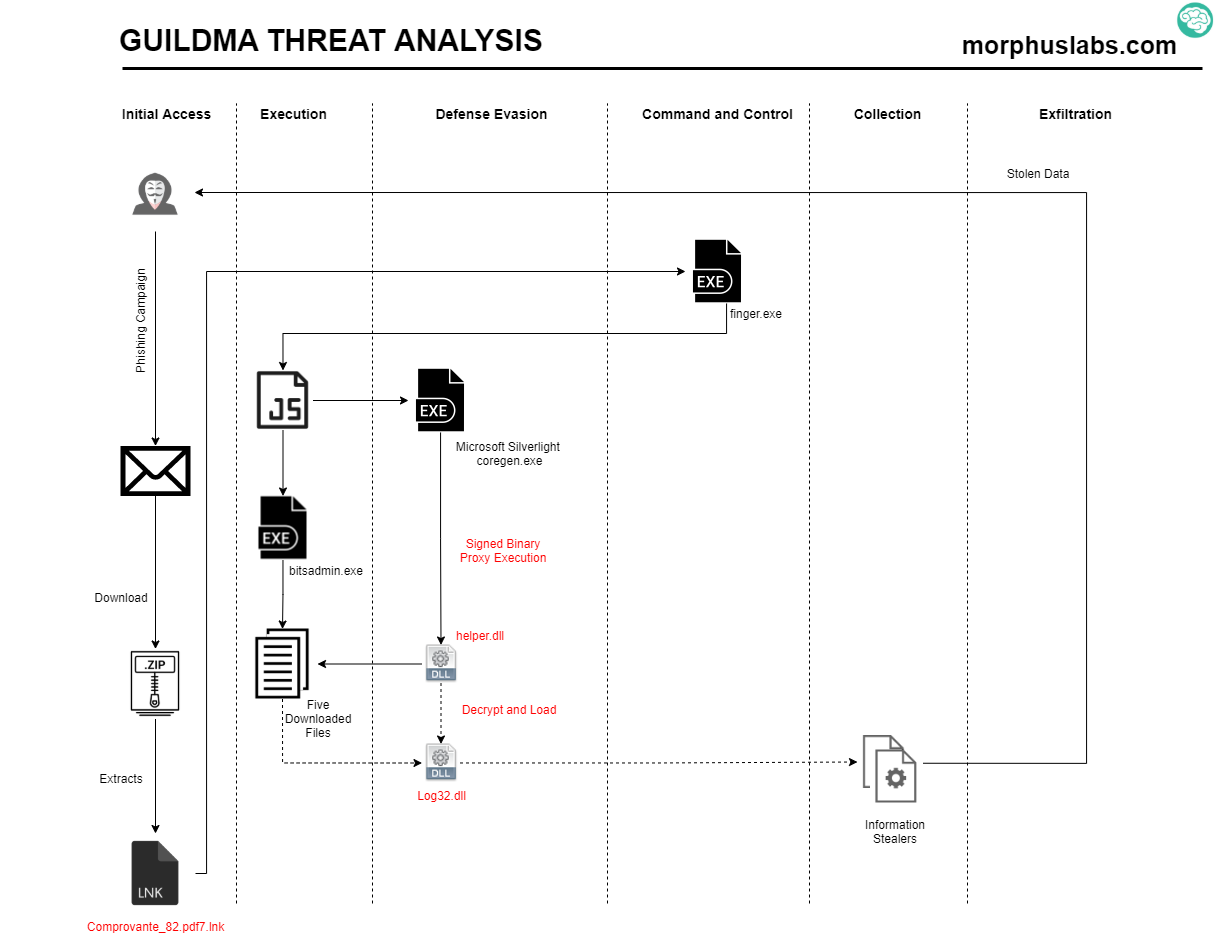 The ongoing campaign starts with an e-mail phishing with a link to a ZIP file which contains an LNK. If the user executes the LNK file, instead of opening a supposed PDF with a proof of payment (Comprovante.pdf7.lnk), it will execute Windows native binary Finger.exe do retrieve the malicious command from attacker’s server on port TCP/79 and pass it to ‘cmd’ to get it executed.

The malicious LNK file is prepared to ‘cmd.exe’ with an obfuscated argument, as seen in Figure 3.

Analyzing the environment variables created by the above argument, it is possible to see the arguments which will be passed to ‘cmd.exe’. Surprisingly, it calls finger.exe, a native Windows binary to an old service, and pipes its results to a new cmd, as seen in Figure 4.

The result of the finger execution is another obfuscated command with a list of environment variables, as seen in Figure 5.

Once executed, the above command will create a JS file containing a VB Script on “%Public%\Videos\” and execute it. This execution will result in five more files downloaded and stored into a random path into Videos, as seen in Figure 6. The download is performed using the legitimate binary bitsadmin.exe.

The downloaded files are listed in Figure 7.

The ‘ctfmon.exe’, despite the name, is in fact, a copy of a legitimate binary named ‘coregen.exe’ which is part of Microsoft Silverlight product, as seen in Figure 8. 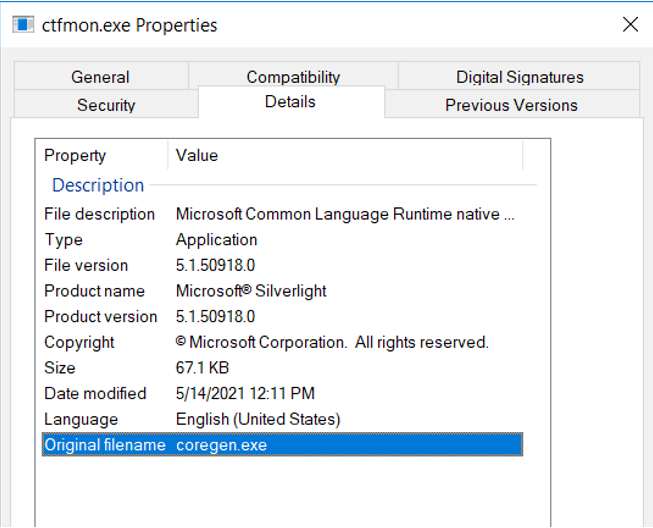 Figure 8 – ‘coregen.exe’ legitimate binary brought over by the attackers

The ‘coregen.exe’ binary is used to load ‘helper.dll’ in a technique named Signed Binary Proxy Execution (T1218) [2]. It is like DLL Side Loading attack, but here the DLL name is passed as argument, as seen in Figure 9. In other words, the attacker is bringing the ‘coregen.exe’ legitimate binary to the victim’s machine and using it as a rundll32 to have its malicious DLL loaded into it as a strategy to evade security controls. 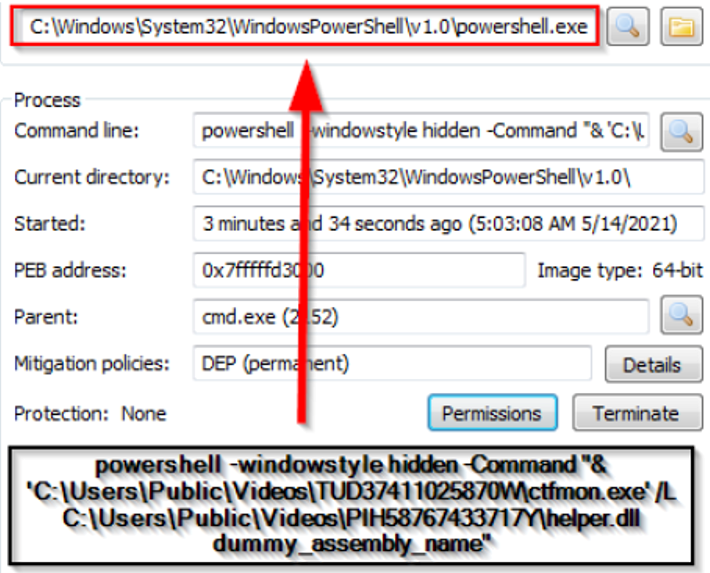 This type of misuse of ‘coregen.exe’ is mapped by Stronic [3], as seen in Figure 10. 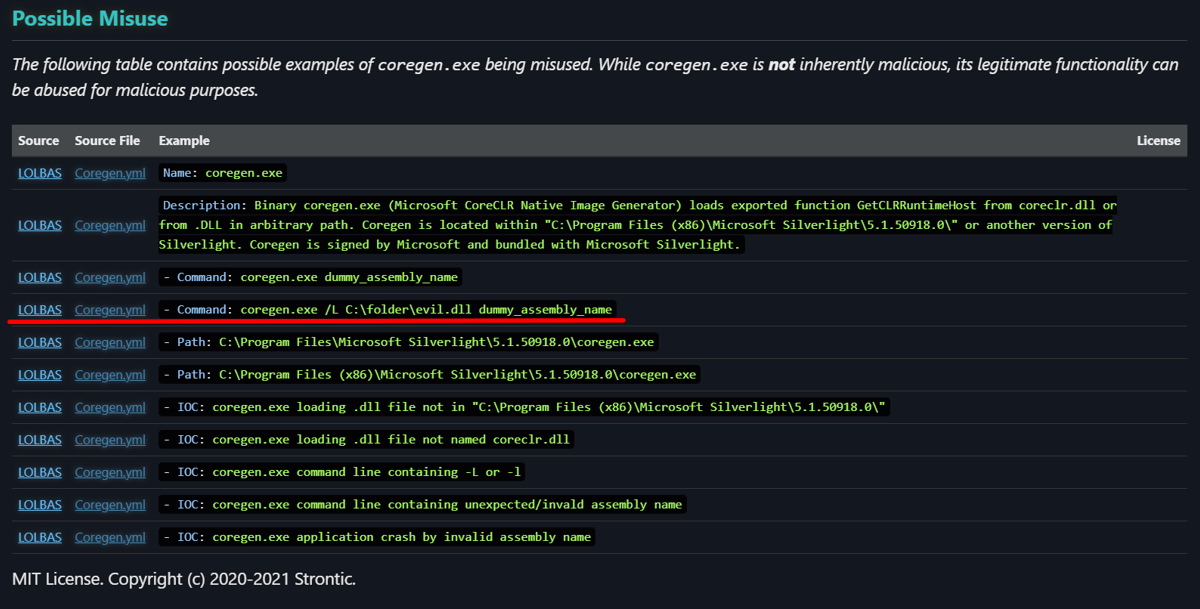 Once loaded, the ‘helper.dll’ will decrypt and load the other DLLs ‘log32.dll’ and ‘log33.dll’ previously downloaded. In the Figure 11 I highlight the routing which decrypts the DLL contents.

And finally, once loaded, Log32.dll will perform multiple anti-debugging, anti-vm and a series of system verification, like keyboard type and system language, the presence of a DLL belonging to Diebold Warsaw (wslbscr32.dll), before unpacking and launching information stealer procedures.

Reflecting on the use of Finger on this new variant, a possible reason that came to my mind was the attempt to bypass security filters that are usually applied to the HTTP/HTTPS traffic. Even employees in home office, may have some type of web browsing filter applied by the company, like web proxies. However, it may not be so common for home firewalls to make a more restrictive Internet outgoing filter, preventing, for example, the exit to the TCP/79 port. In the end, as much as the content travels in clear text on Finger, the attacker may end up having more luck with this strategy than if he used the most common path.

Finally, it is interesting to highlight the use of Signed Binary Proxy Execution technique by the new Guildma variant. Binaries signed with trusted digital certificates can execute on Windows systems protected by digital signature validation – specially those signed by Microsoft, as ‘coregen.exe’.

There are mitigations and detection strategies for Signed Binary Proxy Execution mapped on MITRE ATT&CK [2] which include restricting the execution of particularly vulnerable binaries to privileged accounts that need to use them and establish a baseline for processes and command line parameters for signed binaries to monitor and spot uncommon usage. There is a great project named LOLBAS [5] (Living Off The Land Binaries and Scripts) which maps ‘coregen.exe’ and other binaries that could be abused in a similar way.