A Survey of Bluetooth Vulnerabilities Trends

As usage of fitness trackers, wireless headsets and smart home devices become increasingly popular in our daily lives, a growing reliance on the Bluetooth protocol is expected as it serves as the main medium of communication between devices. Amidst the COVID-19 pandemic, Bluetooth-enabled devices such as phones and hardware tokens were also used for contact-tracing purposes in countries such as Singapore [1]. Currently, the core specification of Bluetooth is 5.2 [2], and are generally divided into 2 categories – Bluetooth Low Energy (BLE) and Bluetooth Classic [3]. Given the increasing popularity and usage of Bluetooth, I started to wonder about the trend of Bluetooth related vulnerabilities. 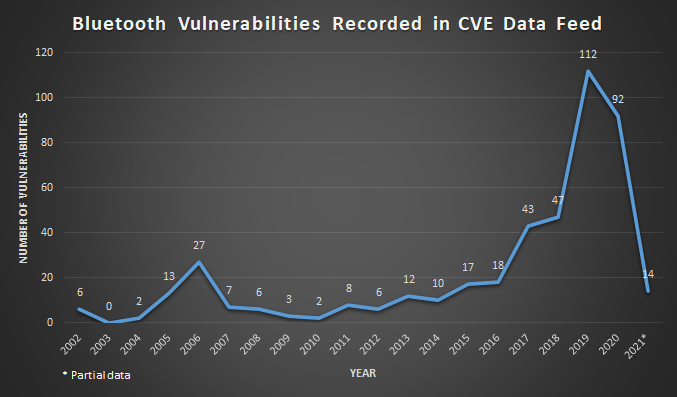 Recent research in Bluetooth Low Energy (BLE) implementations of various vendors have shown that the BLE stacks were vulnerable to some fundamental attacks. The SweynTooth family of vulnerabilities showed that many implementation details specified by the Bluetooth Core Specification were not adhered to by the System-on-Chip (SoC) vendors [6], and this also further affected multiple products that relied on those SoC running vulnerable implementations of BLE [6]. Patching the devices can also prove to be a complicated issue as product vendors have to contact the respective SoC vendor for the security patches.

Keywords:
0 comment(s)
Join us at SANS! Attend with Yee Ching Tok in starting