We've had several reports (thanks guys) of sites being injected with the following string:

Typically it is inserted into several tables.  From the information gathered so far it looks targeted at ASP, IIS and MSSQL backends, but that is just speculation.  If you find that you have been infected please let us know and if you can share packets, logs  please upload them on the contact form.

Thanks to those that posted comments and those that worked behind the scenes.  The injection string is along the lines Terry posted in his comments.  the one I ran across is (note not the whole string is provided)

When discovered yesterday about 80 sites showed in Google, this morning about 200, by lunch 1000 and a few minutes ago 4000+.  Targets include ASP sites and Coldfusion (Thanks Will) The attack seems to work on all versions of MSSQL.

The hex will show in the IIS log files, so monitor those. Make sure that applications only have the access they require, so if the page does not need to update a DB, then use an account that can only read.

Sources of the attack vary, it is automated and spreading fairly rapidly. As one of the comments mentioned it looks like lizamoon which infected over 1,000,000 sites earlier this year.

The trail of the files ends up on "adobeflash page" or fake AV.  Blocking access to the lilupophilupop site will prevent infection of clients should they hit an infected site and be redirected.

Firstly thanks to those that have provided comments and additional information.  As of a few minutes ago the approximate number of sites infected is about 160,000 sites. Looking at where the infections are shows .com, .de, & .uk as the most affected regions.

Based on information in the log files of some incidents the preparation for the attack goes back a little while. Log records show that at least two weeks prior to the actual injection attack the system is being probed for vulnerable pages as well as attempts to identify the product being used.  For example:

From the above you can see that over time there are a few attempts, then the next day the next attempt appears in the log files. The attempts are from different IP addresses, but there certainly is some progression based on responses received. In this instance the PAGEID=189 parameter on page xxxxxxxx.asp is vulnerable.  If you search your log files for 500 errors, go back a few weeks, you will find the probing queries.

If you are still battling this, please make sure that you identify the entry page.  If you restore your DB and bring the system back online without identifying the entry point, then it will only be a matter of time before the system is re-compromised.

I put some things you might look for in the comments section of the diary.  The easiest place to start will be to look for the 500 error messages, mainly because the final injection is likely to cause your DB product to throw an error which will show as a 500 error. Even if it does not, you may be able to identify the probing queries and from those identify the final injection.

When looking at fixing the problem do not forget that this vulnerability is a coding issue. You may need to make application changes. To address the issue make sure you perform proper input validation for every parameter you accept.

This is an ambitious offering and if secure device management at scale worries you, this announcement is well worth your time to read.

Here’s one that’s making the rounds over the last few days and showed up  in my SPAM folder with a helpful attachment. I'm one of those weird people who look to explore the depths of said SPAM folder to see what fun I might find therein.

As an example:
From: "United States Postal Service" <info@usps.com>
Subject: USPS Delivery Failure Notification
Hello!
Unfortunately we failed to deliver the postal package you have sent on the…blah, blah, blah.
Ruh-roh!
The attachment is USPS report.pdf.zip and once unpacked yields USPS report.pdf.exe (MD5: 1fd6c3470b81f278572a27a1bf34cdf2)
A hash search finds this sample already submitted to ThreatExpert and VirusTotal yielding results that refer to the Gamarue family (multiple variants).
Nothing groundbreaking, downright pedestrian even, but bear with me. References to Gamarue.B show up in query results as of late September 2011; you may have seen similar with regard to ACH or Federal Reserve SPAM.
Data from the Microsoft Malware Protection Center shows a steady level of activity for the family overall and indications of this sample as new variant in the last couple of days (per the hash).
This particular sample, as is consistent with other Gamarue samples, modifies HKLM\SOFTWARE\Microsoft\Windows\CurrentVersion\Policies\Explorer\Run and injects itself into wuauclt.exe.
These little exercises are always an opportunity to run output though some of my favorite tools (unabashed tool geek).
I ran the PCAP acquired during runtime through NetworkMiner 1.2 which reassembled the following malware downloaded when it phoned home to 85.121.38.27 (htobertur.ru):
Trojan:Win32/FakeSysdef (MD5: 8ae00c31b5546ee5a1b107c997171bde)
Trojan.Win32.Scar.fevl (MD5: d476533ea0aacb8244dfe0f5e65862a9)
A quick review of the Romanian ASN (AS43215 Monyson Grup S.A.) for the above mentioned IP address shows a tendency towards association with the likes of Blackhole (as referred to in Pedro’s diary), fake AV, pharma SPAM, Zeus, SpyEye, and other instruments of ne'er do wells and malcontents. Zoinks!
A quick Maltego run on Monyson Grup S.A. as a phrase entity proves this out. 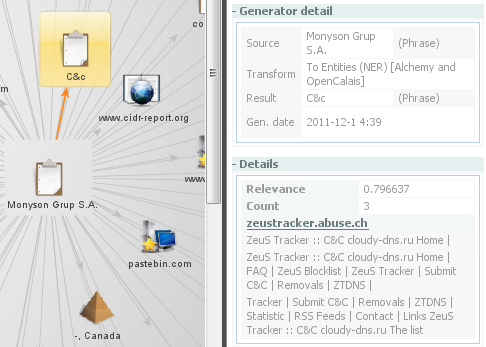 As a friend commented with both humor and sincerity: stay out of that neighborhood.
"And they would have gotten away with it too, if it weren't for those meddling kids…"
Russ McRee
@holisticinfosec
Keywords:
6 comment(s)
Join us at SANS! Attend with Russ McRee in starting