0 comment(s)
Earlier today I came across a new tool that might be useful to InfoSec professionals.  Though it is not a "security" tool, it can be used by support people to help better understand the modifications that may have occurred to a particular system.  Once installed the tool will scan the computer looking for specific types of changes to the computer including....

It creates a nice little XML file that you can use for a variety of purposes.

However in my testing on my laptop, I have found that some software packages appear to make changes in more places then I even knew was occurring. For example,  Symantec Antivirus Corporate Edition changes the path to certain driver files with virus definition updates.  These will be reported as:

Even with these items that may need to be ignored depending on the support issue at hand, the tool may be very useful for determining what end users may have done to their computer.  This eliminates the user's need to accurately articulate the changes to you, if they actually admit to changing something.  For more information on the tool, please see KB Article 924732 at support.microsoft.com.

Peter Stendahl-Juvonen wrote to tell us that this tool is language dependent and that it will work only on English language systems.
Let's hope Microsoft will release a version that works on all language systems soon.

Bojan
Keywords:
0 comment(s)
Join us at SANS! Attend with Scott Fendley in starting

0 comment(s)
If you’ve been reading our diaries for last couple of months, no doubt that you are aware of the huge number of exploits directed toward various Office applications, mainly Microsoft Word and PowerPoint. For quite some time a lot of administrators (us included) told people to convert documents to other (safer) formats, one of them being RTF (Rich Text Format). Although this format is proprietary, the specification is publicly available so a lot of word processors support this format.
Our reader Mike Armstrong reported a phishing e-mail he received from the Better Business Bureau. The e-mail contained a link to a site which hosted an RTF document. As this immediately looked suspicious (a completely unrelated web site hosted just the RTF document, nothing else), I decided to spend more time analyzing this. The file was located on http:// www. nightcrossings.com/[REMOVED].

As you all know, complexity and security don’t go good together. Nevertheless, lately we can see a trend of embedding everything in anything which leads to increased complexity as well. Microsoft Word documents that carry images and videos are completely normal now.
While RTF is a more human readable format (it is a plain, ASCII file at the end), this does not prevent it from embedding objects that can be very dangerous, as we will see.
So, the picture below shows how Microsoft word will open the file Mike submitted: 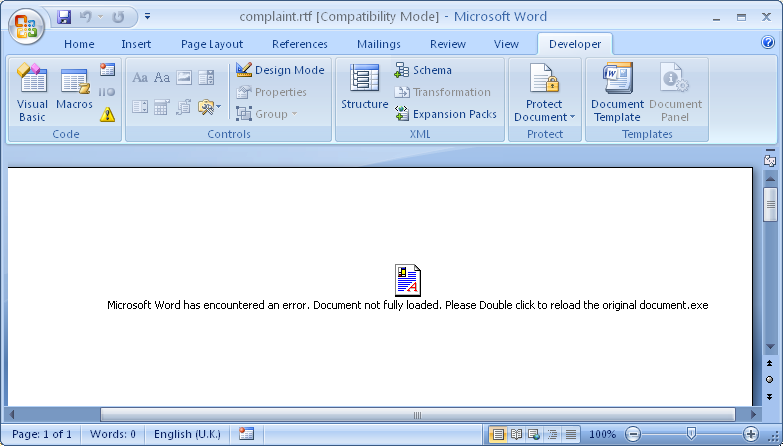 As you can see, this will work in any version of Microsoft Office (I used the latest and greatest Office 2007). The text and the icon shown on the screen shot are all part of a single object that is embedded in this document. This is a fine example of a social engineering attack – the attacker tried to lead the victim into thinking that an error occurred in Microsoft Word and that the file (the object) should be double clicked to fix this.
Luckily, Microsoft added at least another layer of protection here (although, to be honest, why would anyone allow a text based format to drop a file and execute it is beyond me). If our trigger happy user double clicked on the object, he would be greeted with the following alert: 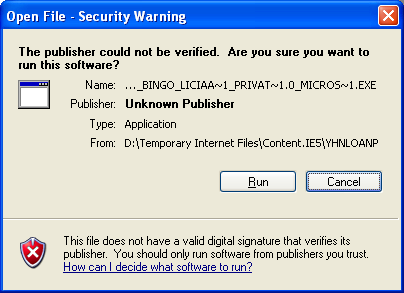 I will not go into the discussion if this would prevent him from starting the file or not, but at this point in time, his last (and only) defense is the Anti-virus program (more about that below).

Object Packager was actually used by the attacker as well – first the file was attached and then the appearance was modified. Same way as it was attached it also allows us to save it so we can analyze what’s inside.
If you know of an external utility that can analyze RTF files please let us know – ideally it would be a perl script (some perl modules exist for parsing RTF files but I haven’t found a nice utility that allows extraction of embedded objects such as this one in one step).
The dropped file is (you can probably guess) a downloader. Once executed it downloads http:// www. nightcrossings.com /[REMOVED]/inv.exe which looks like a spamming tool (it’s a big 1.5MB download of an executable written in Delphi that I haven’t thoroughly analyzed).

Distributing innocent looking files with embedded malware sounds very interesting for attackers. Once I extracted the dropper and downloaded the second stage binary, I ran all of them through Virus Total to see what (if any) detection is. The results were pretty bad and showed that a lot of anti-virus products either had problems with parsing RTF or couldn’t parse them at all which caused them to miss the dropper (some AV programs would hopefully catch it once the user executed the file).
The images below show VT results from scanning the RTF document and the dropper that is embedded in it (after it has been extracted as a standalone file):

The dropper itself was detected as: 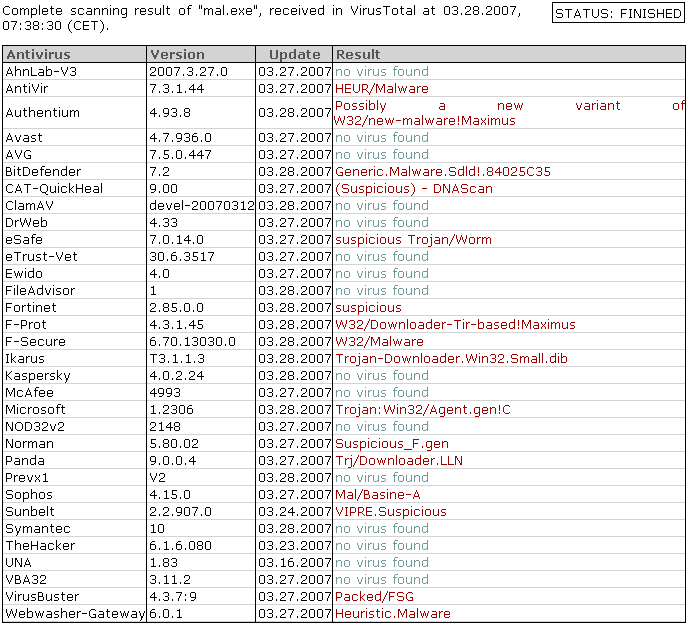 Finally, the second stage binary was undetected by almost all AV vendors – hopefully they’ll add detection for this soon: 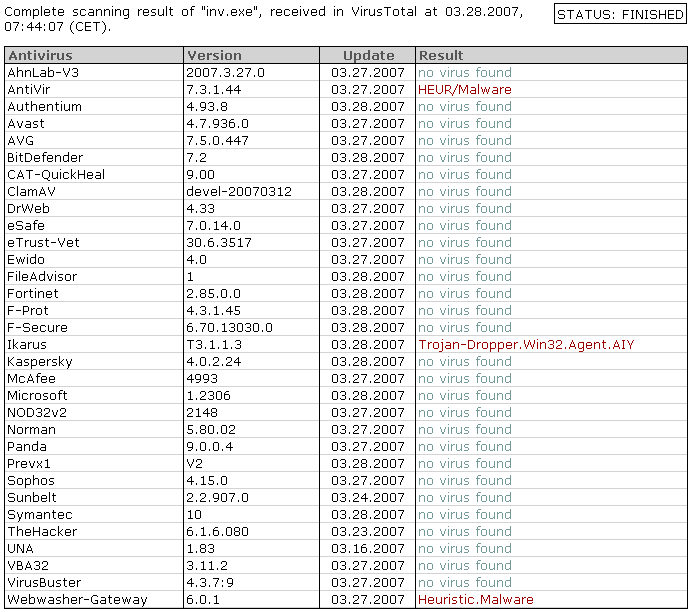 This was another example of why complex file formats should be avoided. Even if you do scan all files on your e-mail gateway (or web filtering server), as you can see most AV programs would miss this as they would scan only the RTF document. One more time we see how important defense in depth is – in this case you would depend on user’s awareness and ultimately on his desktop AV product.
Keywords:
0 comment(s)
Join us at SANS! Attend Web App Penetration Testing and Ethical Hacking with Bojan Zdrnja in Online | Central European Time starting Feb 14 2022

Jikto - The Javascript based bot

0 comment(s)
Billy Hoffman, a security researcher at SPI Dynamics presented a new tool called Jikto at ShmooCon. The tool exploits Cross Site Scripting (XSS) vulnerabilities which tricks victim into running malicious code. The code is injected into the victim's browser where it runs silently. It either seeks more XSS vulnerable targets and reports back to the attacker or it can also report back to the bot controller and await further commands.

Since Javascript is OS independent, this tool will run well on browsers running on different OS platforms. With Cross Site Scripting flaws being one of the most common vulnerabilities reported these days, it is easy to understand the potential effects of a toolkit like this.

Although Billy did not release the tool to the public, the attack principles have been well understood amongst the security research community. Most researchers believe this proof of concept will very likely become real attacks shortly.

Links to the article here and here.