0 comment(s)
If you read our diary articles for a while, you for sure have seen regular entries encouraging you and your users to use other browsers than IE. Now we all expect security minded people to make other choices in what browser they use compared to the general public visiting non-technical web sites.

So do security minded people actually choose other browsers compared to the general population(*) ? 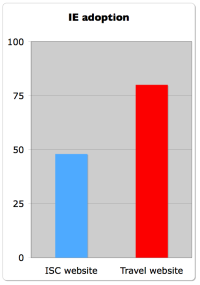 See below for more information on measuring methods.


This chart looks at  two populations and measures how many visitors use a version of IE to visit that web site. As expected the percentage of visitors using a version of IE on a security related web site is significantly lower than on the travel web site.

It's interesting to note that


I've been looking at the evolution in IE 7's adoption since it got released and subsequently put on automatic updates with great anticipation as it would allow me to stop supporting IE 6's bugs when dealing with CSS. 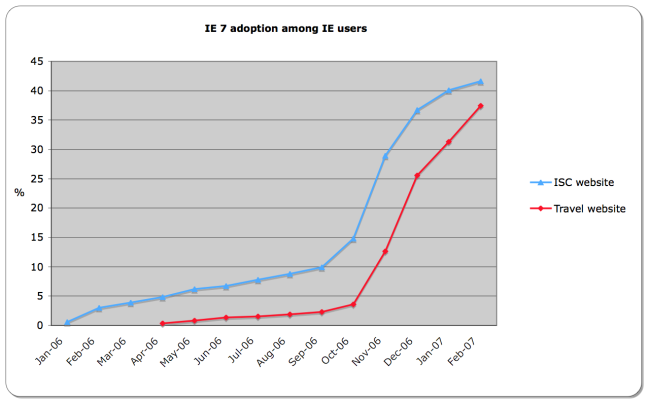 See below for more information on measuring methods.


(*) Data collected on web sites where I have access to the Google Analytics statistics, so any accuracy of browser identification is the same as for Google's Analytics. Hence, this data completely ignores people having blocked javascript by default (e.g. by using Firefox and NoScript) or specifically avoided the script.
Data used to write this report contained no personal identifiable information and was collected using the ISC website for the security minded population and from a travel website for the more general population.